Here are instructions on how to upgrade Phore Core wallets and masternodes. These examples use v1.8.0–if you are upgrading to another version, replace everywhere you see 1.8.0 with the proper version number.

It also includes instructions for using a bootstrap.dat file or a Phore blockchain snapshot to accelerate the blockchain syncing process.

How to Upgrade Wallets

Shut down the older version wallet, shut it down. Wait until it has completely
shut down (which might take a few minutes for older versions), then run the
installer (on Windows) or just copy over /Applications/Phore-Qt (on Mac) or
phored/phore-qt (on Linux).

How to Upgrade Masternodes

When upgrading masternodes, upgrade your controller wallet first. There are two ways people have installed masternodes, and to know how to upgrade, you first need to know which method yours was installed with. If you know you have more than one masternode running on a single VPS, then your masternodes were installed with the VPS installation script, and you can proceed to that section.

For those running a single masternode on a VPS, log in to your masternode VPS, and run the following command to see how the phored daemon is running:

For server with an active masternode, that will print out the line you just ran (ps -ef etc.) and also one line that shows the running phored daemon command.

For masternodes installed with the VPS installation script, it will look like this:

If you see this, use the [VPS upgrade method](### VPS Installation Script Method)

For masternodes installed with either the original type-in-all-the-commands way, or with liray-undelich’s masternode automation script, it will look more like this:

If you see this, use the [other upgrade method](### Other Installation Method)

There could be some variations, but the main difference that matters is the -conf=/etc/masternodes/phore_n1.conf part. That is a clear sign of the VPS installation script, and if nothing is there like that, it is one of the other methods.

For a single masternode installed with the VPS script method, upgrading the masternode can be done with the following commands after logging in to your VPS, with each command on a separate line, pressing Enter after each one:

systemctl restart phore_n1
To verify the status of the masternode after restarting with the upgraded version, type:

phore-cli --conf=/etc/masternodes/phore_n1.conf masternode status
If it says started successfully, that may be all you need to do. If it tells you that it is a hot node awaiting activation, go back to your controller wallet, open the debug console, and type the following, replacing “aliasname” with the name you used for your masternode:

For anyone who used the phore-masternode-automation script, that also has upgrade instructions that can be found at the link below, which really is just logging in to your VPS and entering the following command all on one line:

curl -s https://raw.githubusercontent.com/liray-unendlich/phore-masternode-automation/master/masternode-setup.sh | bash -s – -u -v 1.8.0
For those who installed masternodes with another method, you can download the linux binaries to your VPS, replace them in either /root or /usr/local/bin depending on where you have them installed, and restart your masternodes.

phore-cli masternode status
If it tells you it is not a masternode, wait a minute and try again. If if says it is awaiting remote activation, go back to your wallet and start it with the following command in the debug console, replacing with the name you gave it in your wallet:

startmasternode alias false
After that, you can verify it is working with a couple of steps. First, on the VPS, type:

phore-cli masternode status
That should now say it is started successfully. Then after about 15 or 20 minutes from when you started the masternode, verify on your Phore wallet masternode tab, in the Active column, that the time has started counting up from zero. If it is, you’re in good shape.

You also have the option of starting over with a new VPS, and following one of the two mostly-automated VPS installation script guides available here: 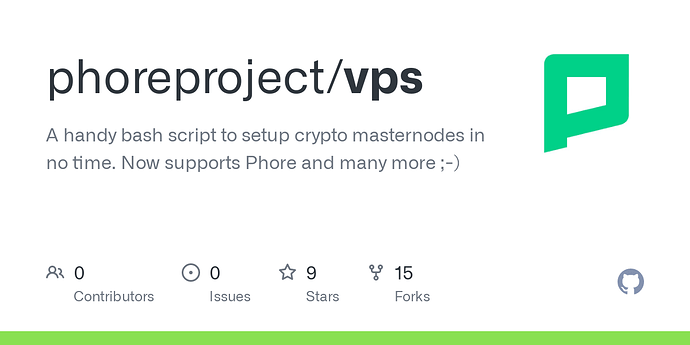 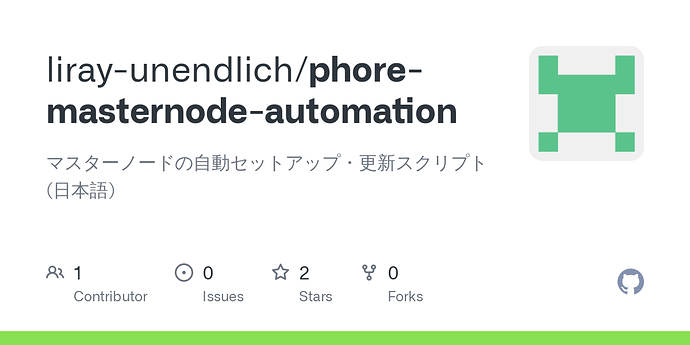 マスターノードの自動セットアップ・更新スクリプト(日本語). Contribute to liray-unendlich/phore-masternode-automation development by creating an account on GitHub.

If you do that, you can set up the new VPS and then delete your old VPS once you have the new one ready to activate.

Syncing the blockchain with bootstrap.dat

It is more secure and recommended to sync the Phore blockchain over the network from other Phore nodes. However, if you have issues with your Phore wallet/masternode syncing the blockchain, for example if it gets stuck on a specific block and won’t continue syncing, in some cases it may help to use a bootstrap.dat file that provides a local copy of all of the blocks up to a certain point. The team has provided a recent bootstrap.dat file to help with troubleshooting in these cases. Unless you have a very slow Internet connection, it is not significantly faster to load blocks from a bootstrap.dat file than it is to load it over the network–it is mostly useful in cases when a user is having issues with that completing successfully.

For last resort troubleshooting where even the bootstrap.dat is failing, we have also provided a snapshot of the key folders in the Phore data directory

Any time you are using either a bootstrap.dat file or a snapshot of the Phore data directory, you use this at your own risk. Do not use bootstrap.dat or snapshot files that are from any unofficial sources, as your node is trusting that the data is from the correct Phore blockchain.

It is more secure and recommended to sync the blockchain online from the Phore network. However, if you have issues with your Phore wallet/masternode syncing the blockchain, or when even the bootstrap.dat does not work, we have provided a snapshot of the key folders in the Phore data directory. Syncing the blockchain with the snapshot will be faster, but is less secure because your wallet/masternode is trusting that all of the previous blocks in the snapshot are valid and accurate.

Using a bootstrap.dat file or a snapshot of the Phore data directory are done at your own risk. Never use bootstrap.dat or snapshot files from any unofficial sources.

Syncing the blockchain with the Phore Snapshot:

Notes on the above process:

The default locations of the Phore wallet data directory that contains the four folders above can be found in our wallet troubleshooting FAQ: Phore Wallet Troubleshooting Frequently Asked Questions (FAQ)

For Phore masternodes installed using other methods, in most cases the Phore data directory will be found in the /root/.phore directory.

On Windows, 7zip is one option to uncompress .tar.gz files. Please note you have to run the file through 7zip twice–once to unzip the gzipped file into a tar file, and a second time opening the tar file to extract the individual folders and files it contains.

For OSX or Linux, after deleting the four folders listed above, you can copy the snapshot file into the Phore data folder, navigate to that folder using Terminal, and uncompress it using the command tar zxvf PhoreSnapshot.tar.gz