(Edited on 1/28 to reflect community feedback and proposals being submitted.)

Currently the Phore block rewards are set to decrease to 5 PHR on block 250,000, which we are scheduled to reach on March 9th, 2018. As currently structured, this would mean that masternode rewards would change from the current 4.2 PHR to about 2.7 PHR, staking rewards would change from 2.8 PHR to 1.8 PHR, and the Phore project development budget would reduce from .77 PHR to .5 PHR.

Some members of the community have argued that the proposed decrease in block rewards is happening too early in Phore’s history. Others have voiced concerns that the development budget is not large enough to compensate the team for delivering the very ambitious 2018 roadmap. Others have advocated that we should keep the current schedule and let the block rewards decrease in March.

The team has looked into this issue and after significant community discussion, we have split this into two separate proposals for voting:

Since we are a community governed coin, we want the community to vote and decide what is best for the long term success of Phore.

We recognize that this is an important decision and could be a contentious discussion so we want to allow as much time as possible for the community to be heard and for masternode owners to cast their votes on what they believe will best serve the long term interest of Phore.

Active discussion in the Phore Discord has been going on in the #block-rewards-chat channel since Jan. 22nd, and the voting will begin today, and continue until the February budget cycle is finalized. The budget finalization point will be reached at block 213,120, which is scheduled to occur around February 11th or 12th depending on your local time zone. You can find the current block by either hovering your pointer over the green check mark in the lower right corner of the Phore wallet, or by opening the debug console, running the getinfo command, and looking at the number on the “blocks” line.

We will also be submitting a proposal for the allocation of the budget for the core team for the month as well, so please don’t forget to vote for that proposal when it becomes available–we are finalizing the details of that now.

If either of these proposals are approved, we will upgrade wallets and masternodes before the block reward decrease would take effect on March 9th. We expect to have several other upgrades and new features ready by then, so we would issue a new release and announce a hard fork, most likely during the first week of March, ahead of the March 9th block reward change.

Here is a summary of what the block reward schedule will be depending on the outcome of the voting:

We have identified some potential pros and cons of the change proposals which we have outlined below. We welcome all comments, questions and feedback in the forum below as we make this decision together.

As you can see from the table above, the changes are not a particularly large increase over the baseline, even over a 2 year time span. By the 3rd year, the block rewards go back to the same rate in all scenarios–the inflation percentage would actually be slightly lower with the increased supply. Nevertheless, it is an increase, and one factor some investors like is the low supply of Phore relative to other coins.

Phore would still currently be at a much smaller market cap and total supply than many privacy and masternode coins, and these changes would not really change Phore’s relative position in this comparison. Also, the additional Phore rewards are all being paid out to stakers, Masternode owners, and the development budget, so the existing Phore community is being directly compensated equal to the increased supply.

Please provide your comments and feedback on these options below, as we really want to hear from the Phore community on this. If there are additional significant pros and cons we can add them to the list above.

Based on community feedback, we are submitting two separate proposals in the Phore budget governance system:

ExtendBlockReward - This is for extending the current block rewards 12 months

1PHRDevFund - This changes the development budget to 1 PHR

Based on the way our governance system operates, for either of these proposals to gain approval, it will require at least 10% of the Masternodes (51 at last count based on 506 total Masternodes as of Jan. 28th) to vote Yes to the proposal, after subtracting any No votes.

If that margin is not reached, we will keep the current block reward schedule including the scheduled decrease to 5 PHR total block rewards split into masternodes, staking, and development budget.

Thanks very much for your consideration of this important decision.

I agree that the current block rewards model should be changed, however I don’t necessarily agree with your propositions. I have made some exemples in Excel of what I consider to be good rebalances of the block rewards.
My favorite rebalance is the first one (in blue).
I’d like to hear what you guys think. 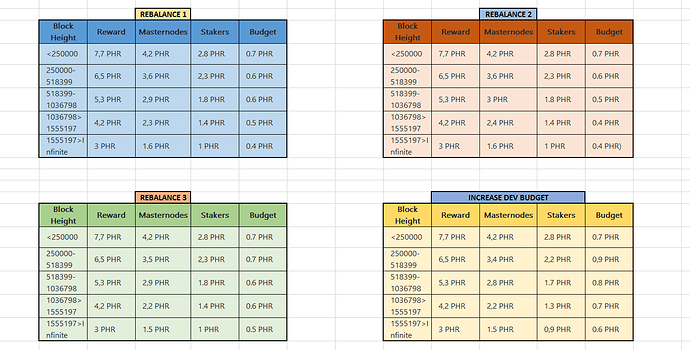 For the reference, here is the current block rewards allocation:

Excuse me, please, but I did not understand how to vote for the variant in which both proposals were fulfilled, namely, the fee for developers up to 1 PHR and 518,400-1,036,798

What should I specify on my command line for voting for both these options?